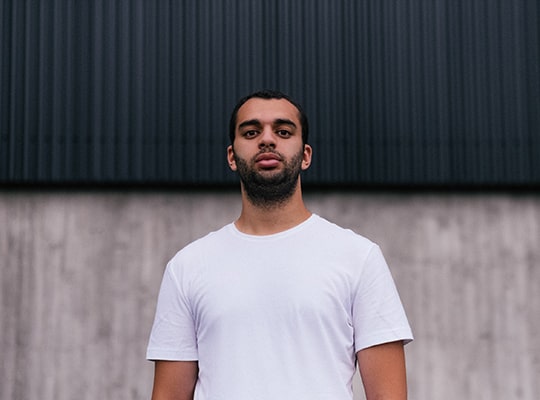 It takes a musician/producer like Ash, with over 400 million streams of his own compositions; the ability to play piano, guitar, sax, drums/pads, electronic keyboards/wind instrument; a life shared between Egypt and French Canada, and a mission to blend middle eastern and French/European influences in electronic music, to be granted permission to film a solo music video at the ultimate in atmospheric venues, the breathtaking pyramids of Giza at sunrise. And he’s still in his early 20s.

The Cairo-born, Montreal-based producer plays his own work live, and even takes his sax or guitar to jam along when DJing, e.g. in Montreal at Velvet or as Resident at la Champagnerie. But it’s the streaming platforms which have enabled him to reach so many millions. Ash’s big break after an encouraging response to ‘Lost’ (2012) came with the monster hit ‘Mosaique’, at first an under the radar experiment with a middle eastern vibe, suddenly on 500k streams a day, 3 months later 40 million, and to date, 100 million, in the top 50 in many countries. Not only a grower, but a stayer – first released in 2016, the streams have been a torrent, boosted by ‘that’ 2019 pyramids video which has almost 4 million YouTube views. Ash has released many more tracks of which ‘Worlds Apart’, ‘Give a Little’, ‘Daydream’, ‘Dans La Peau’, and most recently, ‘Senses’, have all scored between 2-5 million streams on Spotify alone. The world, and perhaps the Sphinx, eagerly await his first album.

Ash had been producing his own work since age 13, having studied piano since emulating his big bro aged 6, and learned his impressive range of other instruments from scratch simply as a way to feature them on his early tracks. A possible alternative career was in politics, as he became a student intern in Canadian Prime Minister Justin Trudeau’s office, until the joy of making music and Mosaique’s success decided his choice of career.

As a child in Cairo, Ash heard French and Egyptian classics, notably pianist Omar Khairat, until at 12 he discovered electronic music and began to DJ and produce, captivated by the melodic trance of Van Buuren and Van Dyk. At 16, a schoolmate introduced him to Electronica, Deep House and the like via Wankelmut, Nicolas Jaar and Animal Trainer.

Ash melds western and middle eastern, acoustic and electronic, French and Egyptian threads into his entrancing melodic style. He has put middle eastern influenced electronic music on the international map, and he’s only just beginning.