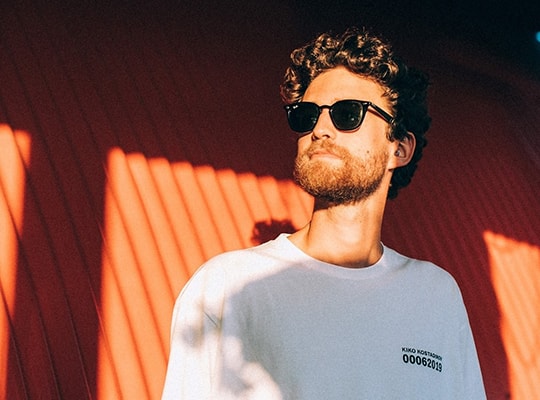 Franky is further cementing his status as one of electronic music’s most dynamic individuals by releasing on a diverse list of labels such as Rejected, Saved, Strictly Rhythm and 8Bit. As well as being a regular within the ANTS and elrow camps, he has performed at iconic venues such as Fabric (London), Shelter (Amsterdam), Amnesia (Ibiza) and Sound (Los Angeles).

Launching his FLOW brand in 2015 with good friend Jasper Fioole, the pair have challenged themselves to bring people into the FLOW state of mind by creating vibrant gatherings and connecting people, whilst creating unique moments to ultimately result in total immersion and enjoyment. FLOW have hosted events from classical music venue Musis Arnhem to Amsterdam's renowned De Marktkantine to hosting stages at Tomorrowland Festival, Extrema Outdoor Festival and London’s Tobacco Dock. Furthermore, FLOW organises its own FLOW Freedom Festival. As FLOW continues to grow, 2020 will see them launch into territories such as the USA, Australia, Asia and beyond, expanding their FLOW Freedom Festival, as well as hunting down one of a kind, unique locations for intimate gatherings.

2020 will also see the relaunch of his own label LTF Records (Listen To Flow): An outlet established to release his own creative works, which is seemingly the perfect moment for Franky as he has developed his own distinctive sound based out of his influences and passions. Formed on the basis of teachings with deep philosophical roots, the label’s intentions are aligned to those of the events; seeking to fully immerse the listener into Franky’s zone. The debut release ‘Primrose’ comes at a time when authenticity within the music industry is key and clearly defines Franky’s carefully considered and deliberate style.

Building a career based on strong philosophies, Franky has consistently aimed to carve his own identity. The new decade dawns an expansion of Franky’s career, with exploration into new territories and areas unknown; his ambition and dedication to presenting an unfiltered version of himself remains unparalleled. Always moving forward and looking for opportunities to grow, the Dutch artist is unlocking his true potential as a multi-faceted performer and artist.