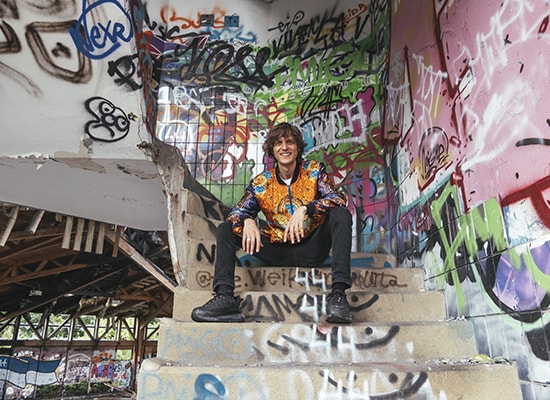 The Lollino approach to DJing connects direct to the roots of authentic dance culture.

After years of proving himself in the booth in the clubs of his elegant northern Italian hometown of Turin, he was tapped as resident for the European branch of Detroit ’s iconic Movement Festival , as well as the city’s renowned Kappa FuturFestival.

Lollino now resides in the electronic music capital of Berlin, starting his year with a slot at its massive HYTE NYE party where he played alongside the aforementioned Carl Cox as well as Loco Dice and Seth Troxler . However, he says Turin is still his home, and he’ll remain a xture at the city’s festivals, as well as holding down his residency at its Chalet Club and his radio show on Italy’s national m2o Radio FM.

“Turin has an amazing underground scene, to some it’s known as the ‘Berlin of Italy.’

Nearly every weekend I had opportunities to play extended sets for as long as 10 hours, and equally there’s always important DJs visiting that I’ve been blessed to play alongside. I’m a DJ thanks to Turin, and I’ve been able to grow up in the center of the dance oor.”

The passion that Lollino brings to DJing is evident in the energy he projects from behind the decks, as someone who never stands still , and still gets goosebumps every time he puts a record on.

Positive vibes are important above all else, as a techno craftsman who puts a focus on the steady grooves. “Versatility is important, to be able to adapt to the energy of where you’re playing. But creating those good vibes in the crowd is what matters most. Energetic, groovy techno.”

Like any good dance oor craftsman, Lollino has cultivated a solid footprint with his studio work, with a sound that draws on his special af nity with analogue production gear. Most recently Tripping on Desolat Music received support from label boss Loco Dice himself, while his remix of Rakuten was featured on John Digweed ’s most recent compilation that showcased his Bedrock label.

He’s also developed a studio partnership with fellow auteur Stefano Genta. The duo perform together live under their Soundside alias, and are preparing for the imminent launch of their own Morning Glory label.

However, the biggest recent step forward for Lollino took place on the White Isle, where he competed in the Burn Residency competition, receiving mentorship under the magnicent Carl Cox, Dubfire, Luciano, Philipp Straub and proceeding to win the competition.

He has now been welcomed into the Artist Alife / Ask My Management Agency as recognition of his talents, and he’ll further establish the Ibiza connection with the launch of his own radio show People Like Us Radioshow Presented By Lollino on Ibiza Sonica every Wednesday.

In the last period one of his pioneers, alongside his career as an artist, becomes the awareness raising for environmental protection, which is why the Kappa Futurfestival 2019 presents his project XP #danceforchange. They recently wrote about him: "The hero of home, in Turin. The man who solves the problems: if a track is empty or is struggling, he is the solution.

Smiles and empathy with the audience, but above all a great technical skill in the console. Ability to turn tech-house trajectories into something hot, unpredictable, eclectic, exciting, reaching to twist everything- always with solid taste and balance. Turin chooses well the heroes of the house".