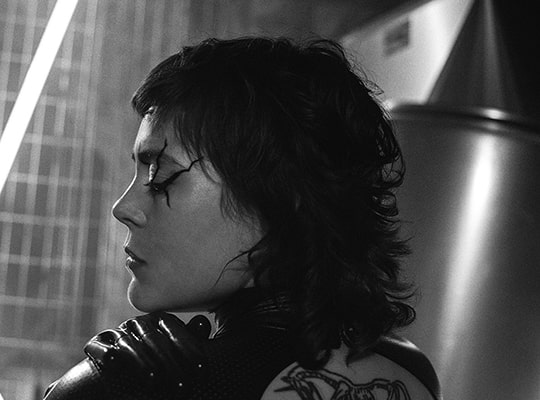 Raised in an atmosphere bursting with passion for music, Louisahhh started writing songs, singing and playing instruments from the age of 13 with a penchant for maudlin guitar jams. Part of a jazz band in high school playing guitar and keyboards, she consistently tried to shake things up, get the band to cover Iggy Pop. Alas, her requests were too radical for the jazz band but her renegade spirit prevailed. As well as punk, Louisahhh’s early influences were largely from rock, industrial, and goth bands such as NIN, Smashing Pumpkins, John Frusciante, Front 242, Garbage and with a sprinkling of classical composers like Beethoven and Mozart.

A natural progression from the sounds of new wave and industrial music, Louisahhhh was eventually drawn to the electronic world of techno and electroclash. Her late teens were the beginning of first forays into dancefloor-specific jams, sneaking into New York City’s underground clubs like Misshapes, Trash and the infamous Motherfucker parties with fake IDs and a hunger for further musical enlightenment. Louisahhh started to make a name for herself as a DJ in the mid 2000’s, a time at which Miss Kittin and Soulwax were hugely influential, yet her true heroines were always more strongly ‘alternative rock’-oriented. Icons such as Patti Smith, Shirley Manson, Chrissie Hynde, Siouxie Sioux and Karen O; influences that will be more evident on Louisahhh’s forthcoming debut LP.

Fast forward to New Years Eve 2013; after getting kicked off the decks at a bottle service party in Miami’s South Beach for ‘not playing commercially enough’, Louisahhh made the decision to move to Paris at the request of Bromance Records, who extended the invitation to have her as part of the team under the condition that she leave then-home in Los Angeles to be present in Europe’s exciting dance music community. In her own words, “ the ultimatum came that I could be an active part of the blossoming label but I would have to move to France. I moved to France”.

After two solo EPs on Bromance (Transcend in 2013 and Shadow Work in 2016), Louisahhh quickly rose as one of the most promising artists within the club scene. Amidst this whirlwind of excitement, the fateful meeting of French producer Maelstrom spiralled into a fast friendship and almost immediate collaboration on several records and what would later become RAAR, the record label they founded in 2015 with the ethos ‘techno for punks, punk for techno-heads’.

2017 saw the release of the seminal EP A Trap I’ve Built and a collaboration with Dave Clarke on his long-awaited album The Desecration of Desire followed to critical acclaim. Louisahhh’s other notable collaborations include Chromeo, Brodinski, Danny Daze and Lapalux.

After remixing artists such as TR/ST, Christophe and dOP, along with several more releases on RAAR, including this years lauded “Silence is Violence”, “Winter” and “Vital Energy” singles (in collaboration with Maelstrom), our heroine is now putting the final touches to her debut album anticipated in early 2020. Louisahhh is set to incorporate early influences and fresh inspiration into what one might call ‘post-alternative industrial pop’.

Literary references also play a big part in both Louisahhh’s life and musical work. The influence of Paul Auster, Frank O’Hara and Gwendolyn Brooks is strongly present in her lyrical songwriting; similarly, Hermann Hesse’s explorations of an individual’s search for authenticity, and Phillip Pullman’s fantastical universe-building prove to be powerful touchstones and inspirations.

Crossing into the world of fine art, Louisahhh is also strongly interested in the work of of multi-media artist Paul Thek, Turner Prize-winning sculptor Rachel Whiteread and contemporary photographer Wolfgang Tillmans. Like Jenny Holzer and Christopher Wool, Louisahhh is inspired by the pursuit of channeling different ways to deliver concepts and confessions in public space through the power of both the written and spoken word. As a producer, writer, performer Louisahhh also relates to painter Albert Oehlen, whose work aims to upset traditional hierarchies.

In addition to being a respected songwriter, Louisahhh has been committed to the craft of DJing for more than 15 years. In 2016, she graced the cover of DJ Mag UK billed as “Techno’s Next Superstar”. After receiving strong coverage in fashion and lifestyle magazines, broadsheets and of course the dance press, BBC Radio 1 soon invited her to be a resident DJ, and Triple J in Australia closely followed suit. Since then there have been mixes for the likes of Boiler Room, ID, DJ mag, NTS and Electronic Beats.

“Kinky Joan of Arc”, Patti Smith of Techno, Trent Reznor as a matriarch, Feminist Submissive, Warrior Queen, Louisahhh may be not the girl next door but punk has truly found it’s next heroine. xx